GSMP tracks free-ranging sharks using sophisticated, miniature electronic tags that are temporarily attached to them for logging and/or relaying data about their movements, behaviour, physiology and/or environment.

Two types of electronic tag are the principal ones we use to track long-distance movements and behaviour of sharks. The first is a position-only ARGOS (Advanced Research and Global Observation Satellite) transmitter that emits ultra-high frequency radio signals when the tag and antenna attached to a shark’s first dorsal fin breaks the sea surface 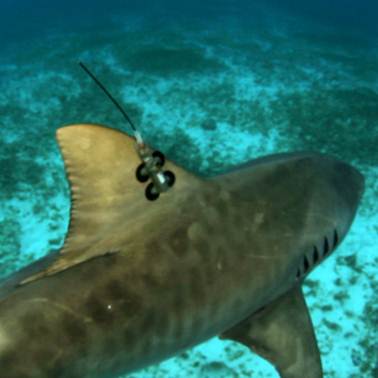 , with these signals being detected by ARGOS receivers on polar-orbiting satellites that relay data to ground stations. Geographic positions of the tag are computed in near-real time and available to researchers via a web portal.

The second tag type is a pop-off satellite-linked archival transmitter (PSAT) that is attached to the fin or body and records swimming depth, water temperature and light intensity, before releasing from the shark at a pre-programmed time, floating to the surface and relaying data to overpassing ARGOS receivers. Data are then processed by researchers to estimate movement paths and activities prior to analyses to study how changing environment and anthropogenic impacts influence shark ecology.

Tags are small, weighing only about 50 – 160 g depending on battery size, and can be attached rapidly, within a couple of minutes. Tagging procedures require institutional, and in some countries governmental, training and approval to reduce the potential for injury to tagged animals.

GSMP is also developing a new tag capable of recording fine-scale body movements, 3D swimming paths and the dissolved oxygen (DO) and temperature of the habitats through which they swim. This new tag and others like it will be crucial for understanding how sharks will respond to climate-driven warming and deoxygenation that is already occurring in the oceans. For more see Projects “Oceanic deoxygenation impacts on threatened sharks” and “Climate change effects on shark environmental niches”.